This will be a relatively short post, updating my series about the ConspiraSea Cruise and the people I met there. For those who haven’t read it, the cruise was a week-long conference for conspiracy theorists. One of the speakers was Sean David Morton, who claimed he could teach people to stop paying taxes, win any court case, and make money by creating esoteric financial instruments. Eighteen months later, he’s been convicted of tax fraud and issuing false financial instruments. And on Monday, he skipped his sentencing hearing and became a fugitive.

Sean, if you’re reading this, call a lawyer. Please. You tried your legal theories in court and they failed, just like they’ve always failed every time anyone has ever tested them in court. They haven’t worked. They don’t work. They won’t ever work. I know you don’t want to hear this from a skeptic and a critic, but I think you also know it’s the best thing you can do for yourself and your family. Call a lawyer, and get some expert advice. They’re going to tell you to turn yourself in, and you should. It’s the best way to get ahead of this situation.

So for everyone else, here’s the situation. Morton was under indictment when I met him, although we didn’t know that because the indictment was sealed. He was essentially charged with taking his own advice, doing the things that he was teaching people at the conference to do. The indictment included over fifty counts of fraud and filing false tax returns. When the conference ended and we all disembarked, IRS agents were waiting for him. They arrested him on the spot, but he was soon released on bail.

Morton made his trial a showcase of ineffective and counterproductive pseudolegal theories. There are dozens and dozens of examples of strange, silly, and totally pointless tactics that accomplished nothing but adding time to his eventual sentence. And it wasn’t just during the trial itself. Before the trial he claimed he’d be calling Donald Trump as a witness; after his conviction, he declared the verdict void, tried to withdraw his “not guilty” plea, and filed a motion demanding to know the nature of the charges against him. The signature block on his motions is a museum-quality display of pseudolegal gibberish:

So with that kind of defense, obviously the jury convicted Morton. That was in April. He stayed free pending his sentencing hearing, where the judge would consider recommendations from both sides and impose a sentence. Theoretically he’s facing almost 600 years, but realistically the sentence is calculated according to a set of standard guidelines. The DOJ filed a memo recommending that the judge impose an 87-month sentence, right in the middle of the guideline range. That recommendation would have been just 70 months, but the prosecutors asked for an enhancement based on Morton’s “obstreperous” conduct. This is the longest and most detailed part of their memorandum, setting out a laundry list of meticulously documented nonsense motions and timewasting stunts Morton pulled before, during, and after trial. 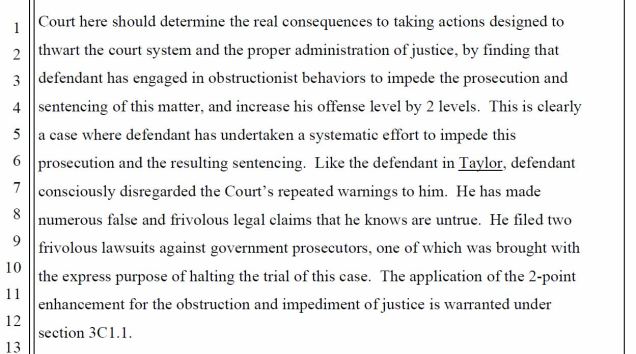 They also notified the court that they’d ask for Morton, who was out on his $10,000 bail this whole time, to be taken into custody immediately at his sentencing hearing. (Normally defendants get some time to put their affairs in order, like making arrangements for children and pets.) They pointed out that he constantly denied that the court had jurisdiction over him, and that he had “passports and Canadian identification.” In other words, Morton’s pseudolegal antics earned him a recommendation for an extra year in prison and a request that he be handcuffed as soon as the sentence was pronounced.

Well, the feds were right. Morton turned out to be a flight risk, just as they predicted. He beat them to the punch, though, and skipped his sentencing hearing altogether. The judge issued an arrest warrant on the spot, and Morton is now a fugitive.

I don’t have a lot of deep insight into this case, or meaningful lessons to draw from it. His decision to flee was deeply irrational, but I suspect motivated by fear more than any subtle and nuanced psychological factors. The guy is facing about a decade in prison, and that’s terrifying.

But if I sympathize with what he must have been feeling, we have to point out that he’s guilty. He didn’t just steal money from the government, he took money from innocent people and put them in extreme legal and financial jeopardy. The people who trusted him didn’t get their debts erased or their taxes eased, and didn’t win court cases–they just wound up poorer and in worse condition than when they started, because they trusted someone who has a talent for deception but had no idea of how to actually help them.

And bolting was objectively a very foolish thing to do. He’s forfeited his bond, so he’ll be on the hook for that $10,000. That’s not so much, given that he’s probably going to be ordered to repay the $500,000 to the IRS, but to some of us $10,000 is a lot of money. More importantly, he’s going to add even more time to his sentence—he could do as much as 2-3 additional years for skipping his court date. The calculation is a little loose, since these are just advisory ranges the court can disregard, but if you take into account the time he may get for his obstreperous conduct, it’s likely Morton has bought himself over 50 months, or 4 years, of additional time. And I can’t even begin to predict the consequences to how he’ll eventually serve his time, but I think minimum security is a lot less likely now.

So if running was so heavily and obviously against his self-interest, why did he do it? Well, Morton called into the Strange Universe radio show—until recently, his own show—on the day of the sentencing hearing. He explained that he’d filed a motion with the Supreme Court, and that they had already (or would soon) issued an order vacating his conviction and exonerating him. He claimed that the only reason the court in his case didn’t know this was that the Supreme Court hadn’t sent the paperwork down there yet. This is, of course, nonsense. Morton’s legal gibberish has failed every single time it’s been attempted, and the Supreme Court has never been, is not, and will not be an exception. If Morton really believed that he was about to be rescued by the Supreme Court, that was a supremely irrational belief.

There’s a lot to learn from Morton’s example, and I’ll be writing more about him in my book and possibly here on the blog.

In the meantime, a few parting thoughts:

First, my apologies for not having anything more insightful to say. I wanted to put an update on the record for various reasons, but I’m not ready to draw any serious conclusions from this yet—especially as we don’t know what’s going to happen. Morton will almost certainly get caught, but he’s a nonviolent offender so it’s not like there’s a manhunt on for him. It could take a while.

Second, let’s remember that Morton’s a person. He’s facing a difficult time and in his shoes, I’d be scared. You would be too. No matter what he’s done, we can sympathize with that.

Third, Sean, if you’re reading this, please call a lawyer. If you don’t have one, call any criminal defense lawyer. You need real advice, from an expert. They can help you minimize the fallout from this. They’ll probably advise you to turn yourself in, and that’s OK. You’ll be OK.