This is part II of our series on the movie “Vaxxed”, which Colin, my sister Julie, and I saw in Kansas City on June 11. In part I, Colin focused on some of the factual inaccuracies of the movie. He talked about how a person attending the movie would have walked away with an extremely distorted understanding of the CDC, a distortion deliberately encouraged by Mr. Wakefield and the makers of the documentary.

As Colin mentioned, we were uncertain about what his reception was going to be after his interview with Mr. Wakefield on the ConspiraSea Cruise, and so Julie and I sat separately from him. (That turned out not to be an issue, and when we met Mr. Wakefield after the movie he seemed, if anything, amused to see Colin. Evidently two of the more excitable speakers on the ConspiraSea cruise, Leonard Horowitz and Sherri Kane, have been writing enthusiastically and imaginatively about how Colin is (among other things) a “spy and propagandist” and I got the distinct impression that they have been sending Mr. Wakefield (who they greatly admire) numerous screeds about Colin’s “deceptions.”)

The audience, about 150 people, was overwhelmingly anti-vaccine. They grew increasingly agitated throughout the movie. One woman in the front row repeatedly shouted things at the screen, including “DON’T GIVE YOUR KID A VACCINE, PERIOD!” (her outbursts continued through the Q&A, to the point where the theater manager had to warn her that he would ask her to leave if she continued).

My intention in coming to the movie and the Q&A was simply to watch, take notes, and hopefully get the chance to ask Mr. Wakefield which vaccines (if any) he thought were safe and effective, or if he thought that no vaccines were safe. I didn’t want to confront him or argue with him, and I told my sister to do the same. That plan lasted about six seconds into the Q&A when he asked “Has anyone in the audience not changed their minds on this issue after seeing our documentary?” Angry and frustrated, Julie sprang to her feet and proceeded to have rather contentious conversation with him. I was initially irritated—this was explicitly what we’d agreed not to do, and I knew I wouldn’t get the chance to ask my question now—but I couldn’t help but be proud of her for standing up and speaking her mind. The crowd was very hostile to us—shouting things like  “Who’s funding you???” “She’s probably on drugs or possessed by the devil!” What they didn’t know is that Julie is a retired professional MMA fighter, totally at ease being punched in the face in front of thousands of people. She’s completely implacable in the face of hostility, and although scrupulously polite, she refused to back down. After making her views clear to Mr. Wakefield (to which he responded with what we think is a lie about how much money he made from his anti-MMR work in England), she sat down and we spent the rest of the session just listening (and receiving angry glares and a few pointed comments). 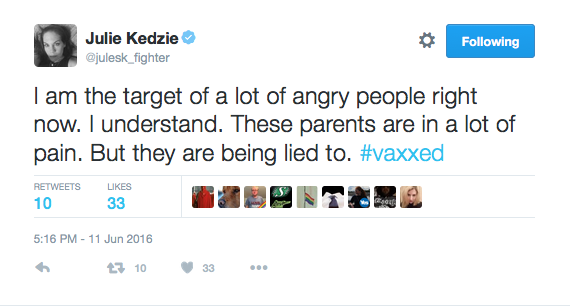 The Q&A showed the extent to which Mr. Wakefield will allow incredibly harmful and irresponsible medical advice to be shared by his colleagues without challenging it [1]. For example, when someone on the panel urged parents to go to chiropractors and naturopaths and to “stay away from pediatricians,” Mr. Wakefield sat in silence and did not disagree with this statement. When a panel member said that GMOs and vaccines damaged her child, but she can “recover” (not cure) him with supplements and correct eating, he did not disagree. When a person in the audience shouted “AIDS was created! So was cancer!” he did not disagree or challenge that statement. When a physician in the audience asked how she could support families and find them exemptions, he said “There are a lot of people here who will be coming to talk to you.” When a parent said “We see this connection (between autism and vaccines), why do they (physicians) not see it?” Mr. Wakefield responded “I think they do.” When a fellow panel member said that “The history (of vaccines) is that we’ve never needed them; sanitation, clean water are enough,” he didn’t disagree.

Strangely, when a parent explained that she didn’t want to give her child a vaccine but didn’t want to lose her pediatrician, and someone in the audience shouted “Forge the records, it’s easy to do!”, Mr. Wakefield did intervene, saying: “No, no, no, guys, you can’t just hide in the shadows anymore. OK? It’s only just dodging [inaudible] the system is fundamentally broken. Do not try and operate within the shadows of a system that is broken, the system has to be broken down completely and rebuilt.” Why did he balk at that but NOT “don’t send your kids to a pediatrician”?

This raises the question of how much of this stuff he actually believes. I can’t possibly believe that he agrees that AIDS was a manufactured disease, or some of the other crazy stuff that was said. However, I believe that he doesn’t want to alienate his audience by saying something they disagree with, and so he sits quietly no matter what is said (unless it’s blatantly illegal). During a conversation after the movie, I did get the chance to ask him if he considers any vaccine to be safe, and he refused to answer me.

I was struck by how angry the crowd was. I’ve never before encountered anything like it. To the scientific and medical community, I urge you to try to understand that these are parents who fervently believe with their entire beings that their children are the victims of a global, sinister conspiracy. This belief is all the more shocking because of its irrationality—they are wrong, but any attempt to reason with them simply drives them further into their beliefs. It was very sobering to watch Dan Kahan’s ideas of cultural cognition actually at work, to see people being driven deeper and deeper into their belief structure. And no wonder—a parent’s love for his or her child trumps all other considerations. They may be utterly, completely wrong about what the cause is, but their passions and fears need to be respected and taken seriously.

Yet at the same time I could see how the conversations of other parents, with other experiences might be effective. A parent with an autistic child whose symptoms showed up before vaccination, a parent of an immunocompromised child who cannot be vaccinated…these, too, are important and emotional stories, and they may resonate where the words of doctors and scientists don’t.

After the Q&A there was a long line in the lobby to see Mr. Wakefield and the other “Vaxxed” panel members. I wandered over to the protesters, who were all members of ASAN, the Autistic Self Advocacy Network. They were cheerful, polite, and enthusiastically having very important conversations with audience members and people from the “Vaxxed” team (some of whom were quite aggressive). I estimated that the majority of the protesters were teenagers or in their early- to mid-twenties. In talking with them, I learned that this was their very first protest. I asked several of them why they were here and got the following responses (directed at the producers of the movie):

“It’s (the movie) part of a larger cultural movement that denigrates autistic people and other people with disabilities.”

“You’ve got to (also) listen to our voices.”

“You’re using autism as a threat.”

I thought that showing up and being present to talk about their experiences—ones which many of us can’t relate to—was extremely effective and very brave. I hoped that the “Vaxxed” team members learned something from their interactions with the protesters, but unfortunately that didn’t prove to be the case. The day after the movie, the “Vaxxed” Facebook page put up a video featuring Mr. Wakefield talking to the protesters with the mocking title: “Protesters stumble over responses when questioned about why they were protesting the film.”  Note that the permission of the protesters was not obtained by the social media team–in fact, they explicitly and repeatedly asked for the cameras to be turned off.

A link to the video can be found (for now at least) on Periscope here.

Sadly, the majority of comments on the “Vaxxed” Facebook page mocked the protesters or questioned their honesty, calling them “stupid”, “freaks”, “sell-outs”, “fools”, and “idiotic.” (I have obscured the names and images of people from whom I was not able to obtain permission to quote).

A few people pointed out that this was wrong.

The language employed by the “Vaxxed” social media team members and their online fans fit with the rhetoric I noticed in the movie, which was highly emotionally charged and fear-provoking. It included phrases like “lost everything” ,“didn’t ever really wake up”, “scary”, “damaged kid”. I have incredible sympathy for the parents onstage and in the crowd. They were dealing with challenges that I never will, and I can’t comprehend the stress that they’re under on a daily basis. But I have an autistic family member, and she isn’t a “damaged kid” or “scary”–she’s a bright, adorable toddler who loves dogs.  The young people in the lobby weren’t “damaged” or “scary”—they were intelligent, thoughtful, passionate people. I admired them for coming out and sharing their perspectives.

I really do worry about the escalating, dehumanizing the rhetoric being used in this movie and in the anti-vaccine community. To Mr. Wakefield and his fans, please consider that no matter how you feel about the issue, these are people who you are denigrating with your hurtful language. You are damaging your own credibility by mocking them.

[1] These quotes are from notes that I took during the Q&A and are as close as possible a transcription of what was said.

84 thoughts on “#Vaxxed, reviewed: What happened outside of the movie.”